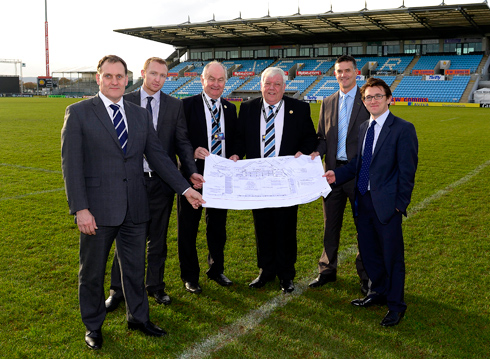 Phase One of Exeter Rugby Club’s multi-million pound redevelopment of their Sandy Park Stadium is to begin early in the New Year, officials have today confirmed.

After months of behind the scenes activity, including raising in excess of £7.5m through the Exeter Chiefs 2020 Bond, the green light has now been given for the planned works to begin.

Earlier this year the Chiefs unveiled their ambitious, long-term plans to transform Sandy Park into a state-of-the-art stadium that would not only see the ground capacity double to that of 20,600 – but also involve the building of three new grandstands, a 1,000-seater auditorium, as well as expanding the conference and banqueting facilities.

To kick-start the first phase of that development, Exeter Rugby Group in August launched the Exeter Chiefs 2020 Bond, which was open to private and corporate investors to raise the initial target of £7.5m.

Last week that target sum was duly reached, much to the delight of Exeter Rugby Group chairman Tony Rowe OBE, who said: “These are very exciting times for the club – both on and off the field – and the instigation of these works demonstrates that we are continuing to build for what we hope will be a hugely successful future.

“For us to progress, as we want to, it’s essential every cog is in place and that nothing is done to jeopardise our long-term goals. Our vision for the future remains as strong as ever and this week’s news is the next step in our journey.”

Helping to guide Exeter Rugby Group through the whole Bond issue have been corporate finance experts Isca Ventures LLP, Prydis Wealth Ltd and Michelmores LLP – all of whom have been praised by Rowe for their “outstanding” contribution.

“Without the help of our experts at Isca Ventures, Prydis and Michelmores, I do not believe we would have got to this stage,” added Rowe. “It has been there vast knowledge and experience that has proved invaluable in helping to move the whole project forward.”

Phase One of the development will see conference and banqueting facilities in the West Grandstand enlarged to span the full length of the pitch, creating a venue capable of hosting more than 1,000 delegates. Additional seating will replace the current North West and South West terraces at either end of the grandstand; whilst the car park will also be enlarged and the main pitch re-laid.

Alongside Rowe, representatives from Isca Ventures, Prydis Wealth and Michelmores have all expressed their happiness at the initial target being reached.

“We were delighted to play a leading role in putting the Exeter Chiefs 2020 Bond together and providing corporate finance support through-out this transaction,” said Mark Champion, Partner at Isca Ventures LLP.

“We needed to come up with an instrument that would suit all the stakeholders of Exeter Rugby Group Plc and be attractive to potential investors, with a corporate bond being a logical choice. The response from members, supporters and investors has been fantastic and we are pleased the Board were able to exceed their fundraising target. We have no doubt the expanded Sandy Park conference centre and rugby stadium will serve the region well for years to come.”

The knowledge and experience of Isca Ventures has proved invaluable in putting the Bond together and helping to move the whole project forward. Our Board is delighted with the outcome and would have no hesitation recommending the partner team at Isca Ventures to others businesses contemplating such a fundraising.